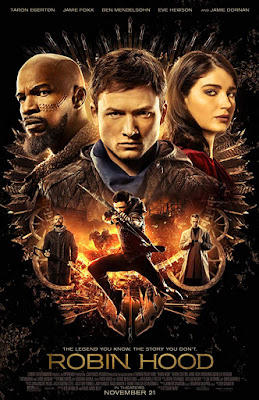 There is going to be a lot of discussion as to why the Taron Egerton headed Robin Hood crashed and burned at the box office. I mean it has a great cast who work over time and spectacular action sequences, why shouldn’t it work?

The answer is simple: they didn’t have a script. Actually they had the incredibly stupid idea about updating the story while keeping it set (kind of) in period and while throwing out everything other than the character names. For all they changed this could have, and should have been set on another planet.

The plot has Robin leaving Marion to go off and fight in the Crusades. There he fights in battles that look like modern day ones but with bow and arrows. He tries to save the life of Jamie Fox’s son and ends up free prisoners, including Fox’s character who later is dubbed Little John. Back in England Robin is believed dead. Marion has married Guy of Gisborne and they live in the mine at the edge of the city. (What no Sherwood?) Meanwhile Sheriff of Nottingham is taxing the hell out of the people in order to finance the crusade (I thought this took place after the Crusade)- which is really a cover for an evil plot the Sheriff has with the Pope to fund the Crusade so the Catholic Church can over throw the king and install the Sheriff as a Papal puppet. (Wait... wha- but England was a Catholic country....)

Your brain hurt? Mind  did.

It gets worse as they don’t even get to Sherwood Forest until the end in an add on sequence that sets up a sequel that makes no sense what so ever. The story is effectively done but they try to stretch it out.(The Pope sets up shop in Nottingham, installing a new sheriff so he can continue to tax the people to pay for the plot that had to be  paid for before the end of the movie.... which makes no sense because they have the documents revealing the plan so everyone knows which means... in theory the King or Prince would be sending troops to squash the plot...But the pope....anyone have an aspirin?)

I hope everyone was really well paid because this film is god awful mess.

Frankly if they were going to change this much they should have set this in another time and place- preferably an alien world where the industrial set up would have made sense. This wasn’t 12th Century England, not even remotely. It’s so historically wonky and so dramatically broken that even the repeated narration at the start that we should forget everything we know is bullshit. If you are changing this much of the basic story, why call it Robin Hood? Why set it in period?

More to the point why make it a reflection of the current War in the Middle East with machine gun like weapons and dress that resembles modern tactical dress? And why have the sheriff’s men look like black clad riot police. This isn’t a subtle political commentary and it falls horribly flat, partly because it’s over done and mostly because what it is trying to say has always been how the sheriff’s men were viewed. They didn’t have to guild the lily.

There is so much wrong with this film I literally was throwing up my hands in the AMC 25 in Times Square.(Apologies to everyone behind me)

What kills me is the cast is really good, and if they had even a marginally better script this film could have been something. Also the action sequences aren’t bad. If they were in another film they would be twice as enjoyable.

Actually because of the cast and the action I kind of like the film in a bad film sort of way- but the truth is this is a bad film and you shouldn’t do what I did and pay money to see it.

One of 2018’s biggest disappointments

Email ThisBlogThis!Share to TwitterShare to FacebookShare to Pinterest
Labels: action, not worth the effort