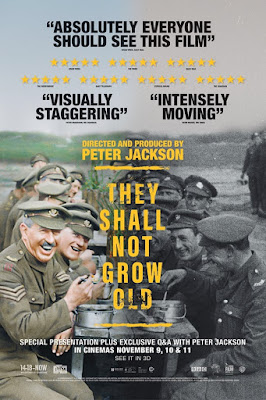 Peter Jackson's THEY SHALL NOT GROW OLD will rattle around in you head long after you see it. I went to one of today's Fathom Events screenings (The AMC 25 in NYC was running it from opening until close in multiple theaters) and it rocked my world.

Cut from over 100 hours of  film from the trenches and 600 hours from survivors of the First World War (the film bears the credit Shot on location on the Western Front 1914-1918) the film is structured so as be what a a soldier typically would have experienced. It is not supposed to be specific (which drove the historian next to me up the wall) but a representation from signing up to going home of what was experienced.

Beginning and ending in black and white in correct aspect ratio to how it was shot, the middle section is in color and widescreen. All of it has been speed corrected, lip synced (we now hear what was said thanks to lip readers) and put into 3D for a visceral gut punch of a film. For the first time we are there- no really. The friend who I went with, a scholar of the war was rocked by what she saw- for the first time it was right there and in color and not a distant memory protected by black and white carnage.

Jackson and his team have made a monumental achievement because not only have they made a towering documentary which makes the war modern, but they have rescued countless hours of decaying film by cleaning it up and making it watchable again.

You really must see this film- if possible in a theater with great sound and 3D If not you should just see it because it will leave you reeling.

Highly recommended- hopefully it will get a theatrical life beyond the Fathom screenings because it is that good (and the theaters at least in NYC) have been packed.
Posted by Steve Kopian at December 27, 2018