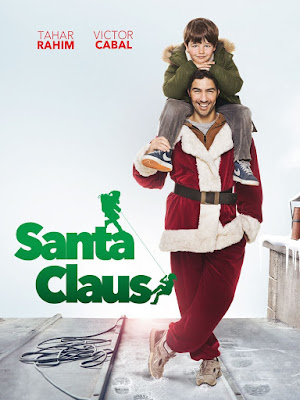 SANTA CLAUS aka Le Père Noël shouldn’t have put a big ass smile on my face but it did. Let’s face it, it hits every single solitary cliché…and for some reason I really don’t care because I was utterly charmed.

The plot of the film has a little boy (Victor Cabal) who still believes in Santa, opening his bedroom widow and finding him (Tahar Rahim) standing there. The thing is that it isn’t Santa but a small time crook with larceny on his mind. The plan is to use the Santa get up to break into apartments and steal the valuables as everyone is out celebrating. Of course the pair end up falling in together and changing for the better.

Yes, it’s exactly what you think it is but it’s still utterly charming. Blame it on the season or whatever you like but I think it’s due entirely to Rahim and Cabal who are so damn charming together that you can’t help but falling in love with their adventures. You genuinely like the teaming that you’ll happily go with it where ever it goes…which is pretty much exactly where you think it will.

Does that make it a bad film? Oh hell no. Its entertaining as all get out though to be honest I know that if I saw this in the middle of summer instead of two weeks before Christmas I would have been less likely to fall under its spell.

That said- if you want something charming for the holiday season I recommend SANTA CLAUS which hits VOD on Monday.
Posted by Steve Kopian at December 14, 2018