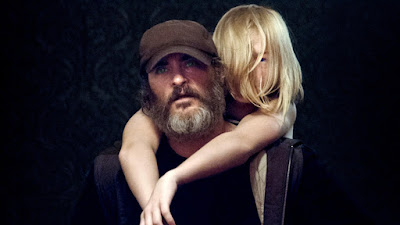 I am struggling to work out if You Were Never Really Here is a victim of being over hyped or just not being very good. I am pondering this because after months of people raving about the film, numerous awards, and friends saying it is their top ten films of 2018 I sat down and watched the film was underwhelmed.

The film has Joaquin Phoenix playing man who is very good at rescuing children. Living off the grid and unafraid of bashing heads with a hammer he brings kids to safety. His latest job, at the request of a senator, is to rescue a certain girl from brothel specializing in underage children. Phoenix leaves a trail of bodies but gets the girl. Soon after the police show to a motel room, kill the clerk and kidnap the girl back. It seems the girl is favorite of the governor.

A suspenseful character driven action film You Were Never Really Here is also an odd ball art film. The violence is often unseen or filmed in ways that are not typical (the initial rescue is seen on closed circuit TV) It clearly has more on its mind than just the rescue of a little girl. I’m not sure how successful it is I putting those ideas over. Not so much that the ideas aren’t there, more that the brooding intensity can be a little much. Much is not said, which is fine I like films you have to work with, but I’m not sure we are getting to know everything we need to know. I was also left a little uncertain by some of the twists of the plot, largely in that a film which holds close to reality, the amout of bodies that pile up, especially ones involving such powerful people seems to rather not really blipped the authorities not in on the evil plan. (I think I would have bought it more if politicos were not wandering through the story)

Then again I could be over reacting to what is here since several people I know have been talking this film up as this year’s equivalent to the discovery of sliced bread. I like the film but nowhere near that much.

IS it worth a look? Yes. While I don’t think its great I did like it. Perhaps if you can keep the raves out of your mind you’ll like it more than I did.
Posted by Steve Kopian at December 07, 2018