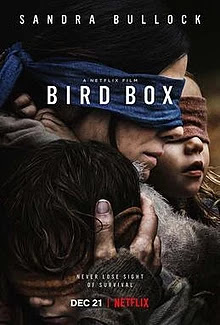 Sandra Bullock and her children flee to what they hope will be a place of safety in a world over run with creatures that cause whomever sees them to commit suicide.

What is a tense film for a while kind of peters out as it slowly becomes clear that the film's basic premise really doesn't make a hell of a lot of sense. Why would beings want people to commit suicide? We don't really know and are left hanging. They just do but it's not enough. While there is no doubt one could work out some deeper meaning of it all if one wanted, but with out something a bit more concrete its a tad hollow. To me doing anything other than taking it all on face value and accepting the premise without question simply leads to disappointment. Yes the story as told results in tense moments and one hell of a trip, but the reasoning or lack there of, deflates it all.

Worth a look for the curious, I'd just try it on Netflix and not pay to see it in a theater.
Posted by Steve Kopian at December 22, 2018