STRUGGLE: THE LIFE AND LOST ART OF SZUKALSKI (2018) 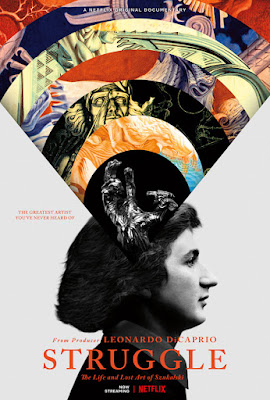 STRUGGLE: THE LIFE AND LOST ART OF SZUKALSKI is a portrait of self-taught Polish artist Stanislav Szukalski who was a friend of Ben Hecht and was, for a time in the Polish nationalist movement between the World Wars.

Szukalski had been largely forgotten by the late 1960’s, due to his life's work being destroyed in Nazi bombing, when artist and collector Glenn Bray discovered a book of his art in a Hollywood book store. It was unlike anything he had ever run across. Several years later after he discovered the artist was not only still alive but living within a few miles of his home  he called him up, beginning a friendship that lasted until Szukalski died. Bray then introduced him to friends in the underground comic community and his reputation began to grow.

Making up the spine of the film are the videos Bray shot of Szukalski explaining his art and world views. It ended up being hundreds of hours and it acts an invaluable record of the man and his art. The film supplements the video with interviews with friends and critics who attempt to not only put the man in the context of 20th century art but also with in the context of history as well. As I mentioned above he was a Polish Nationalist which lead to some uncomfortable revelations about anti-Semitism in the 1930’s. It is those words which echo currently in some part of Poland today.

To be honest I really don’t know what I think of the film. Part of the problem is that Szukalski is really strange man. An autodidact who never really learned to play well with others- he insisted we must all make our own way and not be steered by academics. This result in his walking out of colleges and smashing up museums. It appears he was incapable of taking any opinion other than his own (his friends recount cutting remarks he made about their art). It’s easy to like his art and admire his uniqueness of character but at the same time he can be a twit, if not loopy nut. And the fact that he wrote an anti-Semitic book, despite later repudiating it is somehow hard to reconcile with his views of how we are all unique.

The other problem is that the film is long and rambling. Running an overlong 105 minutes the film is like listening to one of Szukalski monologues, interesting but all over the place and not always seeming at aiming at a definite end place. I was fascinated for a while but the bouncing through time and space without a seeming road map wore me out s,o after while I kind of tuned out. I got the feeling that the filmmakers didn’t really have a point they wanted to make other than to say Szulakski was cool guy we should know about. That’s all well and good, but throwing everything at us without some sort of point doesn’t make for a great documentary. Yes, you can do that with an observational film, but one that is connected by talking heads and documents needs better organizing than we get here.

There is no doubt I love Szulaski’s art and am fascinated by the stories about him, but I ultimately only kind of like the film about him. To me it’s kind of like picking over the corpse of a great man and having to piece together who he was without guidance.

Worth a look for art fans, all others less so.

STRUGGLE: THE LIFE AND LOST ART OF SZUKALSKI premieres on Netflix December 21st
Posted by Steve Kopian at December 18, 2018