Catch-up Capsules BLINDSPOTTING, SORRY TO BOTHER YOU, and SUPPORT THE GIRLS 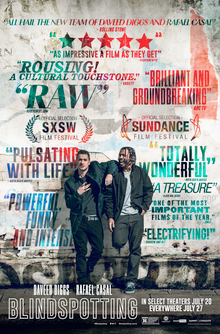 BLINDSPOTTING
Very funny and very pointed comedy about a man with three days left on his probation struggling to come to terms with his situation and his best friend after witnessing the shooting of an unarmed black man. Manages to get the balance of everything exactly right  so that we are moved to not only laugh but feel and, most importantly, think.  This is a film I want to revisit when I'm not doing so in the rush to see as much as possible for the year's end where I can properly assess just how good it is- and it is incredibly good and very very funny. 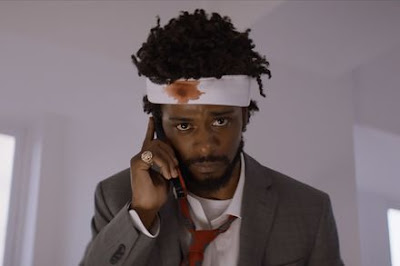 SORRY TO BOTHER YOU
In order to sell over the phone to white people, black telemarketer Cassius Green has to use a "white voice". This results in him becoming a super salesman and putting him on to a grand conspiracy to create a new genetically altered work force. Pointed  comedy gets lost in some surreal twists. I'm all for out there strangeness but this never quite worked for me and I had the feeling that this was pushing things because it could. While I like the points it makes, I'm not so sure it needs to go as far as it does in to the odd, then again keeping things closer to reality might have made its truths unpalatable for some audiences. 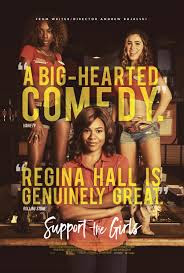 SUPPORT THE GIRLS
Regina Hall shines as the manager of a sports themed restaurant/bar as life happens over the course of one day.  A sweet little comedy/slice of life about the women working at the bar SUPPORT THE GIRLS is a film that worms it's way into your heart. I completely understand the love that Hall is getting in the end of year award polling since she perfectly reflects a life being lived. While I'm kind of quizzical as to why this film has appeared on so many critics' radar, I'm kind of glad it did since it put Hall into the Oscar mix. Worth a look.
Posted by Steve Kopian at December 19, 2018