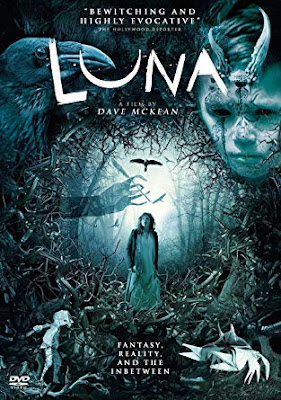 Dave McKean's LUNA took years to complete. Shot in 2007 it couldn't be completed until 2010 and than wasn't released until 2014.

Grant and Christine are still dealing with the death of their son right after his birth two years on. They take an invitation to visit their friend, and Christine's former lover, Dean who lives with his girlfriend Freya. Over the weekend the friends come together, break apart and find the reason why life goes on.

Domestic drama tinged with fantasy is a cinematic masterpiece. Very much the cinematic equivalent of director McKean's illustration and paintings LUNA is not just a domestic drama but a deeper mediation on life in general by a master artist. It is a stunning achievement which has left me unable to really do anything except stare at the screen and marvel.

Right before the release of LUNA I interviewed McKean in regard to his earlier film THE GOSPEL OF US. Not long after the review and interview were published that I found out about LUNA and I reached out him to see if there was a way for me to see the film. He said that there was not at that time because they were trying to work out a release deal for the US and to do so might complicate that. I said I understood having dealt with filmmakers who had similar problems. I then went into a waiting pattern which lasted so long that I completely missed the home video release of the film in the US.

I was curious why it took 3 years  for the film to get a release  and then I saw the film and I understood why, it is much more than just a straight forward drama and I don't think most people can really process what McKean has done with the film. Melding art with reality and dream he has made a film that works on both conscious and unconscious levels. Watching the film you are getting so much information aurally, visually and emotionally that its hard to know what to feel. We, as film goers, or even art lovers are not used to being played as McKean plays us.  Hollywood, and most of the filmmakers in the world...and even the artists in the world can't work on all the levels this film does.

Yes, the film is a domestic drama, but the threads don't play out as a typical drama. The dynamic between the characters has a weight of real friendship that you son't see in most films. Its not just a friendship because McKean says so but because we see how they inter act. Watching Christine and Dean talk about their shared past I could see the way I speak with my best friend Randi. Here in real life there is a closeness there that time has forged between Randi and myself, and it is something reflected in the on screen couple. Watching Christine and Dean on screen I saw the friendship that only comes from a deep love and shared experience. I don't think I've ever really seen that in a film before. I think that's because until LUNA there never really was a need to have characters be that real.

There is a dream logic to it all. Fantasies intrude on reality. Dreams are literally shared- At one point Grant sees his wife's dream when two horned twins come out of the wardrobe and project it on a screen. Grant asks at one point "Am I still dreaming?" because reality is malleable depending on if we are waking, dreaming, or pondering.

And to be honest I really haven't begun to sort the film out. Even with listening to the commentary track in the DVD there is still much I need to figure out and discover for myself.

There is much more to say, but I don't have the words. Just track the film down and see it for yourself. I will not speculate if you will like the film, however I am pretty sure that even if you don't you'll know that you'll have seen something meatier than 95% of other films made today.

A grand masterpiece and highly recommended.
Posted by Steve Kopian at December 13, 2018