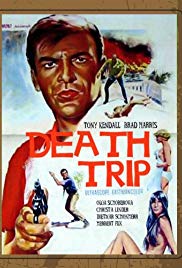 Fourth film in the Kommisar X series has lots of action if little sense. It is also one of the best looking films in the series and one of the few ones to really include characters outside of the main action.

The plot of the film has Captain Rowland transport a million dollars worth of LSD to Turkey for the army. The want it in case of an unconventional war. However it is eyed by  group of bad guys who want it for their own purposes. Joe Walker gets sucked into it when a conversation he has in a bar leads the bad guys to think he knows something about the LSD. Mayhem results.

Filled with real characters beyond Rowland and Walker  this is ultimately one of the best in the series.... assuming you just let the plot go where it wants to. All of the sequences are really good, with some great characters, the problem is the plotting that keeps everything linked up really isn't there so trying to make sense of it can be frustrating.

Then again the action sequences in this film are really great, and they get better as the film goes on with two of the best, one in a castle and it's tower and another set in the desert holding our attention  simply because they are just so freaking cool. (I never expected the motorcycle chase to go that way)

I really love this film a great deal and it's highly recommended, especially if you get the gorgeous print from Sinister Cinema.
Posted by Steve Kopian at December 27, 2018