Islam and the Future of Tolerance (2018) 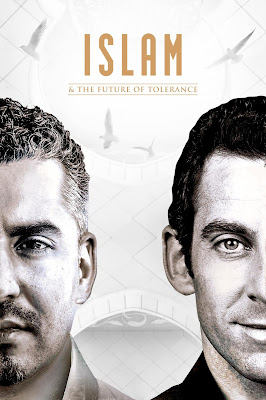 Based in part on the book by Islamist-turned-liberal-Muslim Maajid Nawaz and atheist philosopher Sam Harris Islam and the Future of Tolerance is heady film that will end up rattling around in your head for days afterward. It is a film that will give you a lot to ponder as you reassess everything you thought about religion and faith.

Charting the meetings of Nawaz and Harris over several years the film looks to show how the pair worked to find a common ground concerning their beliefs by engaging with each other and do more than just agree to disagree. It is a film about trying to find a way to have differing religions (and atheism is a religion) co-exist and come together to make the world a better place by revealing how beliefs are turned and twisted.

I am not going to do a full on review. I’m not going to even try and explain what the film really reveals because quite frankly I’m still trying to work it all out. A film that is not just full of ideas but is completely constructed of them. The film is either Nawaz and Harris talking about their lives and beliefs or people discussing them. Everything in this film is one point and is something you have to consider, and I’m still doing that.

I will say that as a conventional film it can be over whelming and perhaps unremarkable. The ideas overwhelm the visuals, which are little more than faces of the men and women speaking. I kind of turned off after a while and I simple closed my eyes and listened. Yes I looked up now and again to get the visual cues when someone was speaking, usually Nawaz who is the more animated of the two, but mostly I just listened taking it all in.

Truthfully though you are not watching the film for the visuals. You are watching it for the ideas. As an intellectual experience this film is top shelf. This is two intelligent people talking about important issues in a compelling way. It is a film that engages your brain in ways that few films ever do. It will change how you think and as such will change how you feel.

Highly recommended for anyone who wants intelligent conversation

ISLAM AND THE FUTURE OF TOLERANCE hits digital platforms today
Posted by Steve Kopian at December 11, 2018