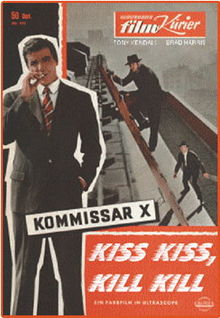 First of the Kommisar X films has Tony Kendall as Joe Walker and Brad Harris as Captain Rowland investigating the murder of several politicians and scientists by a band of killer it women controlled by a gold loving madman.

The Kommisar X series were based on novels by Bert F Island (real name Paul Alfred Mueller). Walker was a New York private eye who worked with NYC police Captain Rowland.  The film series was action packed thrill rides were Rowland and Walker cracked wise and beat up bad guys. While the films were made in reaction to the Bond films, they tended to be less spectacular if slightly more action action packed.

KISS KISS KILL KILL is an odd start to the series since it overtly apes the James Bond films, especially GOLDFINGER and DR NO with a villain with a personality of the former and a look similar to the latter.  The huge spectacle doesn't really work here, owing in large part to the lack of a matching budget. It also doesn't really work since the plot plays like a couple dozen other Bond film rip offs of the period.

The film suffers from a certain uncertainty as to what it is. Part of the problem is things are tad rambling, the plot isn't really clear for a least a third of its running time. The film also really doesn't know how to handle the Walker/Rowland dynamic which in later films had the pair as friends if not defacto partners. Here they battle each other as much as they battle the villain.

I will give the film points for not be really specific as to where it's set. While the main characters are supposed to be New Yorkers that clearly isn't the case here. This is somewhere in Europe

While not a bad film, it's enjoyable on its own terms, I think it plays best if you aren't a huge fan of the other films in the series since it doesn't feel like the other films.
Posted by Steve Kopian at December 24, 2018