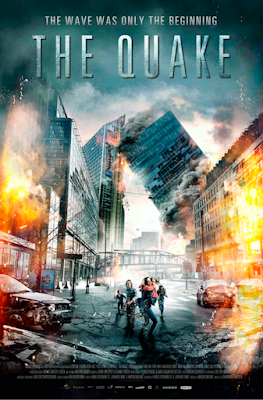 THE QUAKE is the sequel to Norway's Oscar entry a few years back called THE WAVE. That film was based on an incident where a tsunami went into a fjord and wiped out a village. This film is based on the fact that in 1908 there was a 5.6 earthquake in Oslo.

Picking up from the earlier film our hero is dealing with the emotional trauma of the earlier tragedy. When he hears of the death of a colleague in an underwater tunnel from falling debris he looks into what happened. He soon discovers that despite the insistence that there has been no seismic activity, everyone seems to think recent tremors can be linked to blasting for construction, there is something going on and it seems to indicate that something terrible is going to happen...and with the title THE QUAKE you can be damned certain it does.

While I don't think it is completely necessary to have seen the first film, I do think it will help. While seeing the earlier film will allow you not to need to get up to speed on the characters, the real plus is simply knowing what happened in the earlier film since it's referenced a great deal in the first 20 minutes or so of the film.

The film follows the plan of the first film with our hero investigating the evidence of an upcoming event, it happens and then dealing with the fall out. Where the first film balanced set pieces with character development, THE QUAKE largely deals with characters and plot for much of the film before the big one hits.This allows us to feel for the characters once the worst happens, which helps since the film's major flaw is that it takes about 70 minutes for the earthquake to happen. We need to feel for the characters because waiting over an hour for the promised destruction ends up stretching the suspense either to the last possible second before the tension breaks or past the breaking point. (I've spoken with a couple of people thought it went too long).

Once the quake happens the film goes into over drive as Oslo is destroyed and our hero along with his family and friends are left in danger. The resulting set pieces are incredibly tense, almost impossibly so even if some of them are unrealistic. This is what we all came for and the film doesn't skimp on what happens, keeping it epic in scope even as we remain focused on the characters we have been following from the start.

Do I recommend it? Actually yes. The film is good enough on the whole to warrant seeing it if you can see it on a big screen and/or with great sound. This is disaster filmmaking done right and Hollywood could learn a thing or two from it.
Posted by Steve Kopian at December 10, 2018