Kommissar X-Three Golden Serpents a.k.a. The Island of Lost Girls (1969) 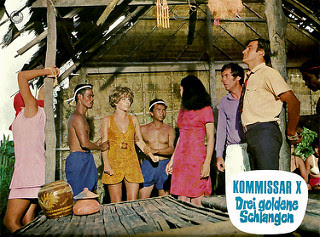 This is the first film in the Kommissar X series I ever saw and it hooked me. the fact that it just starts and goes straight on to the end was such a delight. While not a perfect film it still is an absolute delight for anyone wanting to see a movie that is sound and fury and in no way deep.

After the daughter of a rich woman is kidnapped by a group planning on turning her into a sex slave for their ends she calls in Joe Walker to try and track down where she went. Hooking up once more with Captain Rowland the pair are attacked at every turn by the baddies who fear that they will discover their evil plan. They are so afraid of the pair that they promise to release the missing daughter if Walker and Rowland are sent away.

Full of great locations, its a Bangkok that no longer exists, and pretty much non-stop action. There is zero attempt at explaining who our heroes are, they are the good guys and that's fine since the plot never stops moving and the violence is never more than two or three minutes away. It doesn't make a lick of sense but it doesn't really matter since this film is just so much damn fun.

To be honest the details in the plotting makes zero sense. Things happen just to keep the plot moving. For example one character escapes from the secret island but has no idea where it is despite driving a boat from it. Additionally Walker and Rowland are trying to run down a tattoo  linked to the bad guy but never notice that the lead henchmen carries a scepter in the shape of the tattoo. The lack of sense isn't fatal even if it is funny, because things just keep moving along.

I love this film. It is one of the best in the entire Kommissar X series and a damn fine film on it's own terms. Highly recommended.

The film is available from Sinister Cinema and is free streaming from Amazon Prime.
Posted by Steve Kopian at December 29, 2018