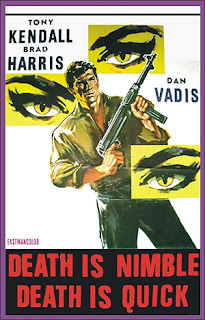 Second of the Kommisar X series  has private eye Joe Walker (Tony Kendall) and NYC police Captain  Tom Roland (Brad Harris) called to Sri Lanka in order to investigate the death of a government official and protect an heiress which are tied to the criminal organization known as The Golden Cats.

I recently came upon a beautiful widescreen copy of this film via Sinister Cinema and decided to dive into the film for the first time in several year. Seeing the film in a beautiful widescreen the film improved greatly from past viewings.  While I have always been a fan of the series DEATH IS NIMBLE always was a mixed bag wit some great action sequences mixed with a bit too much talk.

What is interesting about the film from a historical perspective is not so much the fact it is clearly influenced by the Bond series, rather it's the fact that the killer knows karate. When this film came out martial arts were just  being integrated into western films and to have the fact tat a killer knowing how to kill with just his hands must have seemed fantastic. Now of course it feels kind of quaint. On the other and it does allow for a pretty good show down for in an ancient temple at the end.

After a bang up start and some nice bits along the way (the action, the flesh eating bacteria, the witty repartee) this is not as good as some of the other entries in the series. The problem here is the film has long sections where there is too much exposition. It's not so much that there is exposition rather that the film stops moving during it. Part of the problem is that there are simply way too many side characters to carry the film with two heroes, two girls, multiple secondary good guys, four or five bad guys plus other level characters and they all get quality screen time. It makes for a well rounded group but it slows the progress of the plot way down.

Reservations aside this is a really good series and is highly recommended especially if you are a fan of 1960's action films  and liked films like the Jerry Cotton series or similar films.
Posted by Steve Kopian at December 25, 2018