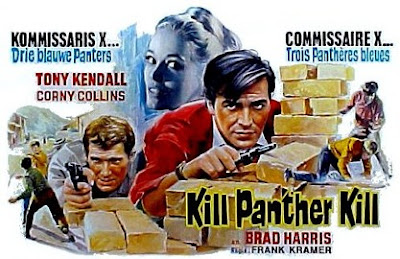 Fifth film in the Kommisar X series is tonally all over the place with the result that despite some great action sequences the film is a chore to get through.

The film begins with a jail break that leaves three police officers dead. It seems that the escapee knows where a cache of stolen jewels are hidden and the guys breaking him out want the jewels. Of course so do other groups including Joe Walker who is working for the insurance company.

Running a very long 89 minutes the film suffers from being padded in numerous places. Part of the padding comes in the form of location footage of a rodeo and partly it's padded in that the film frequently stops so the various characters can chase each other or Walker and Rowland for no really good reason.

The film also develops a rather dumb sense of humor with several gags stretched to the point of breaking and a jokey score which kills any thought of suspense. I never laughed and just kept checking my watch.

On the other hand the film does have a few great set pieces such as the opening escape and the judo school fight which make it kind of worth seeing.

Recommended only for fans of the series.
Posted by Steve Kopian at December 28, 2018