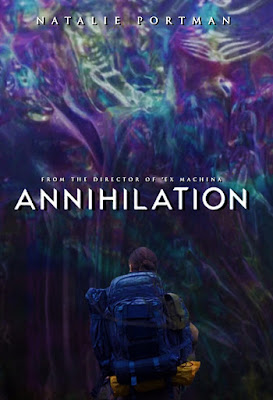 Nominally based on Jeff VanderMeer’s best-selling Southern Reach Trilogy (it's named after the first book but incorporates material from all three books) the film charts the course of Lena, a biologist whose husband returns after a year on a secret mission. Something is wrong with him and when he is rushed to a hospital the ambulance is waylaid and Lena finds herself in a secret government base on the edge of "the Shimmer". Hoping to find out what happened to her husband and perhaps find a way to make him better she joins a party going into the growing zone.

Weird mystical science fiction film has been the source of much discussion as to year end best of lists, Oscar nominations and general "why aren't people talking about this film" discussions. I went into the film because several people I know have been arguing that its one of, if not the best film of 2018. While I don't think it's the best film, I did like it.

Another in a long line of films about a quest which changes are hero ANNIHILATION is kind of akin to Andre Tarkovsky's STALKER but with more danger and killer visual effects. Where in the earlier films the men are looking to get to a room in the center of a zone where they will be granted a wish. Here the party is simply looking for answers in a lighthouse.

While most certainly a trippy, often gripping thrill ride,  I'm not certain how deep and mystical the film really is. Like the end of 2001, the final half hour throws up a lot of clues and handholds that we can hang our conclusions from but I'm not sure it really amounts to anything. The trouble is that in attempting to provide some answers for those who require them, the film kind of loses steam and what it seems to be saying isn't what we had going on in our heads. Because the film has it's champions, I'm certain that some people like the solution provided, as for me I would have liked more uncertainty.

To be fair the film did have me in it's thrall for most of the running time. I was, for the first 90 minutes, willing to go with it wherever it wanted to go. Then in a scene that had one of the party somehow managing to tie up the others in chairs without waking anyone I broke with the film. It was a plot twist that didn't work for me. For me the film then became a simple march to the end at that point where the plot mechanics needed to turn in a film with an "ending"got in the way of everything that previously surprised at almost every turn.

Despite the bumpy last half hour I do like ANNIHILATION a great deal. How can you not help but like a film that attempts to be intelligent and not follow the typical paths?