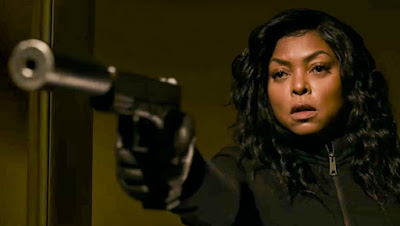 Proud Mary was one of the most anticipated films of the year within my circle of friends. Everyone wanted to see it, expecting it to be a second coming of a Pam Grier style exploitation film. When it finally arrived in January the reaction was less than positive. It took a while for me to see it, but when I finally did I found it was actually a pretty good action film.

The plot has Taraji P. Henson playing Mary. She is a hit woman for a local gang. When she leaves the son of one of her targets alive (the boy didn’t see her) she feels responsible for his welfare. When fate puts him literally in her path once more she takes him in. This complicates things because he has become a runner for a rival gang. Her efforts to get him out of the life go horribly wrong and the result is gang war that no one really wanted.

This is a good little action film. It has great action and solid characters. That the film works as well as it does is entirely because Henson is in the lead. She gives us not only a kick ass heroine but also a wounded one. There is clearly more going on inside her and we feel every conflicted step she takes. She is a heroine for this age and I would love to see more films with the character.

I have to say that having gone through a bunch of the Pam Grier films right before seeing Mary, I found that Proud Mary is actually much better than the earlier films. While I am a huge Pam Grier fan, I am fully aware that many of the films are not very good and survive because Grier carries them. Films like Sheba Baby are objectively dreadful. Yes they entertain but they are truly silly even by 1970’s exploitation standards. It may not be the prevailing attitude but Proud Mary outshines them.