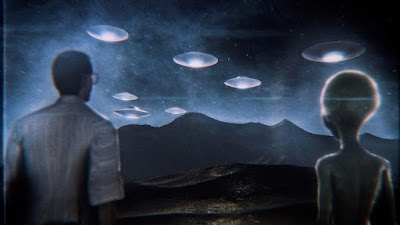 I really liked BOB LAZAR: AREA 51 & FLYING SAUCERS but I am really mixed on it.  For one thing the film is a great portrait of Lazar who has always been a lightning rod for people in the UFO community. On the other hand the film struggles to be really mystical and it kind of distracts from the man himself.

For those who don't know, Lazar is a scientist who claims to have worked at Area 51, where the UFOS are kept and saw them fly, saw the alien bodies and was told how things worked. There has been questions about his background because official records largely have been wiped clean but phone lists and news stories support his claims.

Containing some old interview footage, the film is largely made up of several interviews with Lazar where he talks about what he saw and the cost it has had on his life. It good and interesting stuff.

The trouble is the film tries to me mystical at times. The narration, expertly delivered by Micky Rourke talks about different dimensions of belief and altered experiences and such a bit too much. We don't really need it since Lazar is a compelling soul. More so now that he has been beaten down by the madness surrounding his claims. There is a world weariness to him that adds a great deal of credibility to what he is saying since no rational individual would have umped into the lion's den had they know what it would bring.

Divorced of the mystical stuff I really liked the film. I like it enough that I am going to get it hen it is released to have in my collection.

Should you see it. If you have an interest in UFOs  yes absolutely, especially if you know of Lazar and are looking to see him speak at length on his life and what he's witnessed.

Own it on Digital December 4th and Available On Demand December 18th
Posted by Steve Kopian at December 04, 2018