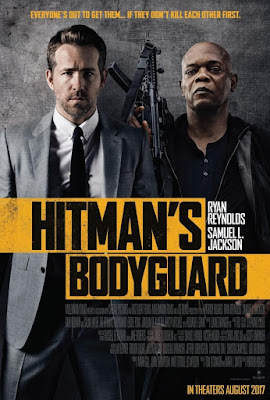 If I told you that Ryan Reynolds and Samuel L Jackson were in a film where they crack wise for two hours while shooting guns, and that excited you then The Hitman’s Bodyguard is for you. The film, which effectively reduces the buddy film to it’s most basic elements, is simply two hours of wisecracks and gunfights and if that sounds good to you then you’re set. If not go elsewhere.

The plot has a disgraced security expert (Reynolds) taking a job for and friend. She is an Interpol agent who needs to get a notorious hitman (Jackson)to the trial of a war lord. Never mind the hitman has been the bane of existence, he needs the job so they set off, only to be hunted all along the way.

There is more but it really doesn’t matter this is all about the action, verbal and physical, and as macho sparring this film can’t be beat. No it doesn’t make a hell of a lot of sense but you won’t care, Reynolds and Jackson are working at the top of their game. That may not sound like much, but it’s enough. The jokes make you laugh and the gunfights keep you on the edge of your seat…and that’s all you need.