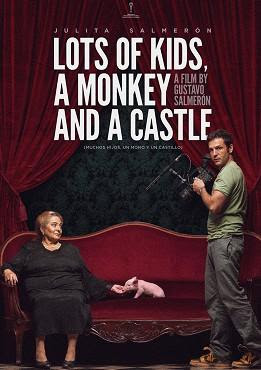 I’m not going to go into a any detail about LOTS OF KIDS, A MONKEY, AND A CASTLE, not because I don’t have a great deal to say, but more you have to buy a ticket and take the ride yourself. I’m not being glib, rather I’m trying to get over that this film isn’t about anything so much as the trip and its one hell of a cinematic trip.

The film is the history of filmmaker Gustavo Salmerón‘s family, and specifically his mother, Julia. It begins, more or less, with his mother telling her son, when she isn’t really aware that he is filming, that she grew up wanting a lot of kids, a monkey and a castle. She eventually got all of them…but there is a lot more to the story and especially the family history, which spins out before our eyes as Salmerón and his family go looking for the vertebrae of their great grandmother which their mother kept as a souvenir.

If that last line made you raise an eyebrow or do a double take then you know why I really don’t want to spoil the story. This is a story that just goes and you just have to belt in and go.

For me the film echoed conversations that I had with many of my older relatives. It as like when I asked "Who is Aunt Sophie?"  and it spun out into a tale about my then still living great aunt who took the identity of her younger sister who died as an infant in order to be “younger”. Salmerón's stories are different but you get the idea, crazy family stories which seem normal to our elders but which give us pause.

To be honest I’ve been trying to run down LOTS OF KIDS since it played at DOC NYC last year. I was intrigued by the film and wanted to see it but I couldn’t fit it in. When the chance to see it came I jumped. And I’m so happy because the film is a lot of fun.

LOTS OF KIDS, A MONKEY AND A CASTLE is recommended when it opens Friday 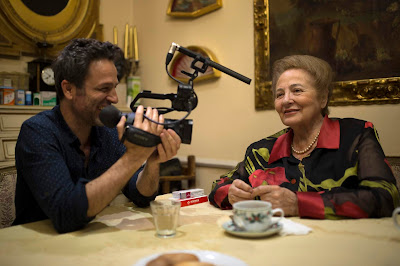