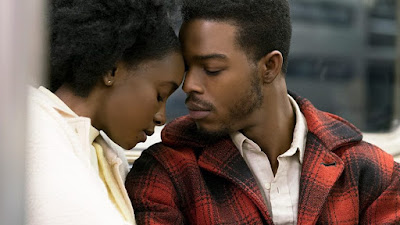 I was curious to see the new film by Barry Jenkins, writer and director of Moonlight. If Beale Street Could Talk is based on the book by James Baldwin, which I can’t remember if I ever read or not. It takes place in the 1970’s in New York. It’s a story about a boy named Fonny, who is wrongfully accused of rape, and his girlfriend, Tish, who finds out she’s pregnant, and is trying to get him out of jail.

The film goes back and forth between past and present. Going in chronological order to show how the two have known each other practically their whole lives, and how then they became lovers. There are so many sweet loving moments with them. Then the film shifts to present time with Tish visiting Fonny in jail, and the family fighting to free him.

There is a cute scene with Dave Franco as a real estate agent.

This is a sad film. I think I felt sad during the whole film. As Tish says in the beginning of the film “I hope that nobody has ever had to look at anybody they love through glass.” It makes you feel sadness more than anger. It deals with issues that are very prevalent today. The cast did a fantastic job. Personally I don’t think it’s as strong of a film as Moonlight. I didn’t love it as much as I thought I would, and from hearing others around me, no one seemed blown away. I do recommend it though.
Posted by Steve Kopian at October 09, 2018