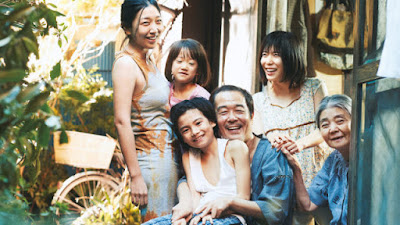 Hirokazu Kore-eda’s Cannes Palme d’Or winner is a film I need to see again. I need to see it again because all the talk has me liking the film and not loving it. I can not see what everyone has been raving about since Cannes.

The film tells the story of  some scammers and shoplifters. Brought together to form a family unit we watch as they go through their paces and just try to survive. For about two thirds of the films running time the film is a rambling account of the family over a several month long period. They deal with loss of jobs, closing of some of their favorite targets and life in general. Then in the final third of the film it's time to pay the piper and a series of events occur to change the fortunes of the family.

For me the problems with the film come from two places. The first is that what happens in the final third could be guessed at early on, as the young girl the rescue ends up on TV as a missing person, one character dies and the chain of "ruin" is sparked by the attempt of one character to prevent another from being caught stealing. Nothing that happened is really surprising, except for a Kore-eda film. Normally he doesn't take the same path most filmmakers would. This is the sort of thing that I would expect from a lesser filmmaker, especially in such an award winning film. Kore-eda hits every plot point dead on perfect with the result that there is no real emotion other than the wrong kind of sadness.

The other problem for me is there doesn't seem to be much going on here. Yes, the film makes a clear statement about how the families we make are better than the ones we are born into, but there is nothing else really worth worth noting. Additionally I'm not sure what I'm actually supposed to feel since the in several moments, including the final one, the score seems to be a bit too light for the heaviness that we should be feeling.

Don't get me wrong, I like SHOPLIFTERS, I just don't love it and I'm confused by all its accolades.
Posted by Steve Kopian at October 05, 2018