Christina Tucker takes a look at Hong Sang-Soo's HOTEL BY THE RIVER, or Gangbyun Hotel (2018) NYFF 2018 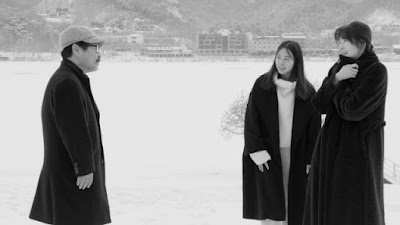 Hong Sangsoo’s Hotel by the River (his 22nd feature) is a film that seems to take place inside of a dream, a liminal space of coincidence, premonition, and visually stunning simplicity not found in reality. The nearly-empty hotel alongside the Han River feels separated from space and time, peaceful ambient noise and snow-covered landscapes a meditative vision in black and white.

Here, an aging poet Ko Younghwan (Ki Joobong) has invited his sons Kyungsoo (Kwon Hae-hyo) and Byungsoo (Yoo Jun-sang) to visit him, as he senses that he is near death. Ko is handling the aging process with the often-entertaining dramatics you would expect from a poet - he is poetic, lyrical with his every observation, as peaceful as a martyr, and has isolated himself in a riverside hotel for two weeks. As such, his sons, and the audience, take his premonition with a grain of salt. Still, they humor his attempts to reconnect with his sons Byungsoo and Kyungsoo, whom he left in their childhood. The younger of which, Byungsoo, barely remembers him. Byungsoo, Ko’s youngest son, is a film director, something Sangsoo plays for a few meta jokes throughout. He’s not a real auteur,” a young woman named Yeonju (Song Seonmi) says, and that his films are ambivalent.

Down the hall, Yeonju visits her friend Sanghee (Kim Minhee) who has gone through a breakup - she also has a burn on her hand, from an unknown cause, that effectively adds a physical sense of helplessness and injury to her character to parallel her emotional one. Their plot is undoubtedly the less prominent, but overlaps charmingly with the main story. The two also have some less than mystical coincidences that connect them to the other men - for example Kyungsoo’s car is the same that Yeonju crashed in the past, that has since been repaired.

Hotel by the River’s exploration and visual character are characterized by a frankness, and as Yeonju said of Byungsoo’s, ambivalence. Sangsoo has made himself an observer, presenting us with often-limited information and leaving us to wonder, contemplate, and make our own conclusions about the coincidences, interactions, and natural events that take place. Its ending is depicted with as much gravitas, and as much reasoning as its beginning, which creates an inescapable, effective feeling of heartbreaking melancholy and contemplation.

Every element of Hotel by the River’s form is simple and striking, allows nothing to distract from every interaction. At the start, voiceover narration quickly lists the title, production company, and stars at the beginning of the film, seemingly eager to move on to the meat of the trim 96 minute runtime. A black and white palette allows figures to stand out shockingly against the snow of the hotel, and simple but striking shot composition allows nothing to take away from the interactions taking place.

Throughout, character’s voice-overs state their assessments of the goings-on, the same mundane observations present in the conversations.

Ko’s relationship with his aging body - for example, a scene depicting the chore of getting dressed, as he labors to put on his socks - is presented with such unflinching commitment, effective in its focus. We see him grapple with aging in a single scene before he says anything to his sons, and this informs much of the subsequent sympathy you feel for a father with a lackluster history with his family. Ko’s various struggles, with social interactions, with his guilt, with what seems like depression about his age - make a sympathetic character of a man who is a somewhat unreliable person.

Humor in this film, comes from the misunderstandings, monotony, and repetition inherent in everyday conversation, especially with between close friends and family. People of different genders, of different ages, are victims of losses of translation. The performative nature of impressing family members you are aiming to impress or reconnect with, particularly because of Ko’s anxiety and lack of social graces, are genuinely funny.

Part of the connection the viewer cannot help but feel toward these characters is due to the dialogue, aided by the use of long takes. Entire conversations taking place in minutes-long takes make every conversation feel immservie, as real as any conversation one has had with a family member or friend. Again, there is a sense of focus that demands observation and contemplation.

“Men are incapable of love.”

Just like in any conversation with a loved-one, no matter how close, there are things left unsaid. Kyungsoo never tells his father his marriage has fallen apart. We never find out the details of Sanghee’s breakup, or her injury, or the nature of the car accident. It is these gaps in our understanding that add a layer of mystery to the realism present in the interpersonal reactions, and lend the ending that much more of an emotional punch. There is still a yearning, in watching a film, to understand what has gone on, and why, and when that catharsis is not given, in this case, there are resounding questions of how? and why? That are likely more effective than any straightforward resolution, that would ultimately feel false.

There is, however, a drunken conversation at a restaurant that turns explosive reveals the truths that the three men have been hiding this entire time that approaches the sense of catharsis that a film still needs to signal a change, some manner of conclusion. Byungsoo and Kyungsoo explain their hurt, and their mother’s, to Ko, who explains his reasoning as a younger man for leaving his family. They reach an understanding, but nothing is “solved,” and the two sons return to the hotel separately from their father.

The characters themselves, particularly the sons of poetic Ko, particularly Byungsoo, are shocked and distraught at the night’s tragic end, and what begins as an enthralling, peaceful story of a family reunion and a woman helping a friend through a breakup, becomes one where both the characters and the audience are made to feel guilty for disregarding the feelings of its main character. The ending and its commitment to the frankness that permeates the rest of the film, is an impressive feat that puts the preceding film into perspective.

Ko describes Yeonju and Sanghee, when he comes across them standing in the snow, as a “sublime painting,” a fitting description of this film as a whole. It is a meditation, on nature, on natural processes, on aging, on death, on family, and on the way these indescribable things are at the center of human lives. Hotel by the River, with striking and focused filmmaking, presents a story full of the kind of coincidences and interactions that fill everyday life, and does so without explanations, simple solutions, or concern for direct cause and effect, allowing the viewer to truly feel the powerful emotional dissatisfaction, frustration, and confusion inherent in human life.
Posted by Steve Kopian at October 09, 2018