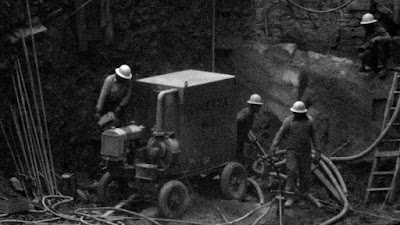 DREAM OF A CITY confounds me.

Filled with images of New York City from sixty years ago, the film stuns the eye with almost every shot. It’s marriage to a largely classical soundtrack often raises the stakes and yet by the half way point I was largely done. For all it does right the pacing is off and it never quite builds to anything.

Filled with 16mm footage that director Manfred Kirchheimer and his friend Walter Hess shot the film is structured around the building of some skyscraper near the Empire State Building. The film then breaks off to show us street life and other places in the city before returning to the construction site. The images are often glorious and are the sort of images that will stay with you forever.

The problem is that most of the first half of the film is the construction, and while it’s fascinating to see the difference in how things are done (there are no barricades and people are effectively watching mere inches from the workers) but there is simply too much of it. How many whirling steam shovels can we watch? The film shifts away from that in the second half but the damage is done and the spell is broken. Yes it returns for an image or a sequence but mostly the film becomes something that is nice over all but nowhere near as glorious as the individual images.

I like the film but I don’t love it. I love the pieces, the images, the Sinatra joke and the parts much more than the film as a whole.

Is the film worth seeing? If you can see it big and without distractions yes, the images are truly breathtaking. However if you can’t see it big it’s less necessary.

DREAM OF A CITY plays October 6 and 8 with the feature CARMINE STREET GUITARS at the New York Film Festival
Posted by Steve Kopian at October 04, 2018