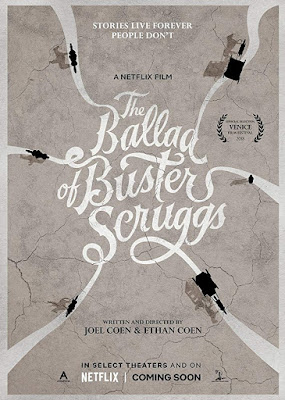 How you take the Coen Brothers THE BALLAD OF BUSTER SCRUGGS will be determined as whether you see it as one film or six short films.

Created  from six western themed shorts the brothers wrote over the last 25 years the film is linked together as if they are the stories in an old  book called the The Ballad of Buster Scruggs and Other Tales. The pages turn and after a view of a color plate illustrating the story we see the short film.

As six separate films they kind of are pretty good. Each plays as a kind of literary film.

The first part is the titled tale. It concerns Tim Blake Taylor as a singing cowboy who is also a homicidal maniac. Jovially talking to the camera we watch as he goes into town to get a drink. Very violent, very gory and very funny this actually could be turned into a feature unto itself. Its an amusing tale that turns the singing cowboy genre upside down and inside out. It may very well be the best of the bunch.

The second part is kind of a sketch where James Franco tries to rob a desolate bank, thus setting in motion a series of near death experiences.Its an amusing tale that kind of starts and ends and doesn't leave much behind.

The third one is a literary short film about Liam Neeson as a theatrical entrepreneur who takes an actor with no arms and legs around to recite scripture, monologues and  poetry. As time goes on fortunes begin to fail. This is kind of an art house tale and other than it's sting in the tail doesn't belong here.

Tom Waits headlines the fourth tale playing a prospector chasing a vein of gold. A solid little film, this is one that could be expanded to feature length so that we see the backstory.

The longest one is the fifth one. A wagon train romance is in its way utterly charming until the the denouncement. Once we reached the end I wasn't really shocked, more wondering why it took so long to get there when the payoff has been used in one way or another in variations on the tale. I don't dare tell you where lest you know where this ends up.

The final tale is a great little piece for a bunch of great actors who are tasked with traveling in a stagecoach to a fort. They snipe and bitch at each other until the film takes a kind of spooky turn which may or may not mean what we think it means....except that the brothers said at the Q&A that this one was influenced by Rod Serling.

As shorts I like the stories a great deal. I think they are neat little tales. The trouble comes in with the the whole package. As a feature BUSTER SCRUGGS is a mean and nasty little film where cruelty and nastiness is a way of life. Deaths are horrible, bloody and often over done for comedic effect. One such story is amusing, by the fifth tale I had kind of checked out as the brothers simply abused the shit out of their characters.

Its been said that the film is a meditation on mortality because pretty much every main character dies badly. I'm not too sure about that since there are no lessons learned just sudden turns where life fucks everyone (but one) over. What is there to meditate when the film essentially and simplistically says, we are all doomed to die horribly. As for any deepness beyond that, I don't think it's there since the stringing together of the shorts makes bits like the Liam Neeson's art house tale less than it is by bumping up against the others in the anthology.

What makes it all tough is that as a feature the overdone and constant violence overwhelms. This is just violent ugliness made humorous and after a while it wears one down. Yea its funny to see Buster Scruggs shoot up people in ridiculous and funny ways but after watching the terrible deaths of people we liked its just too much to enjoy.

Actually it becomes clear almost at once that there really aren't going to be survivors, and because the film is a series of bad things happening we soon go from waiting to see what horrible thing will happen to trying to work it out before we are told. The Coens then mess with the audience by allowing one person to survive- thus lulling us for a cruel slap in the next tale. Its a cruel trick that doesn't feel like clever plotting so much as a practical joke of placement. Its the build up of ugliness over the six tales that makes me like the film better as parts because we aren't beaten up by all the nastiness.

Problems as a whole aside THE BALLAD OF BUSTER SCRUGGS is worth a look see, more so when you consider it will be seen on Netflix where you can start and stop at your leisure.