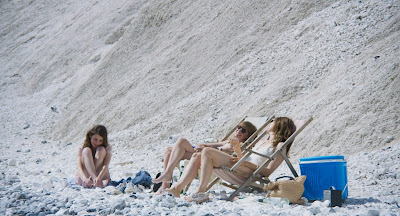 Songs in the Sun is a film that I am still wrestling with. An odd little film ,it runs just over an hour, it is both distancing and visceral. More than a week after seeing it I’m still not sure what I think about it.

The film begins when a young woman gets a call from the mother of one of her friends. It seems her daughter is acting strangely and she is worried. Would it be possible to come by and see her? She does come by and finds that the her friend is obsessed with finding the garden of the Cliff King, a place her mother said she had stumbled upon when she was a child. What transpires is a kind of dance between the women as they try to sort out what is behind the obsession.

Kind of an art film and kind of not Songs in the Sun is its own little piece of cinema. While at times very deliberate and artistic that keeps us distant, there is a raw emotional truth rumbling underneath it all. There were several times where I was moved by what I was seeing, much more than I should have been had the film been a pure art film. When the film ended I was left staring at the screen- pondering what I had just seen and knowing that I needed to see it again because the brief material I had read on it from the Bushwick Film Festival hadn’t done it justice.

While not for all audiences, for the adventurous film goer or one with a bend toward the art house Songs in the Sun is highly recommended when it plays Saturday.

For more information and tickets go here.
Posted by Steve Kopian at October 11, 2018