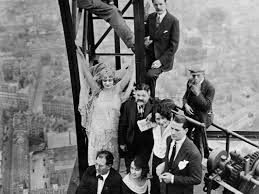 Rene Clair's first film as a director  is a lovely rambling film about a scientist who freezes everyone on the ground in Paris with a new ray. Those who were above it end up wandering the city with deserted and frozen people.

A small trifle of a film it has much of the whimsy that can be found in Clair's later films. While far from great it is entertaining and it's clear why the film as survived the 95 years since it was made.

To be honest the real joy of the film now is you are here now cinematography which has the characters wandering around an empty Paris. Particularly wonderful is the sequences shot on the Eiffel Tower. To say that no one would be allowed to shoot from the tower in a similar fashion is an understatement. The images are simply arresting and a must see.