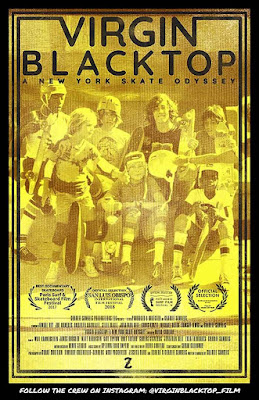 Virgin Blacktop is a great film. This unexpected delight is one of the highlights of the year and a must see at the Margret Meade Film Festival.

The film is a chronicling of filmmaker Charlie Samuels‘ teen years when in the early 1970’s discovered skateboarding and formed friendships with a bunch of equally smitten friends. It is a joyous celebration of the best things about sports and their ability to bring joy and friendship. It is also a perfect explanation of what it was like to skateboard in the 70’s-before the Internet where the only way you knew what was going on was the monthly Skateboarder magazine or managing to run into other skateboarders. Any tricks you learned you taught yourself.

For me, a guy close in age to the men in the film, it was a nostalgic trip down memory lane. Their explanations of what it was like is exactly how it was- or how I remember it. Transcending the skateboard culture this is a beautiful snapshot of what life was like in the 1970’s. This was what it was like to hang out with a bunch of guys and do what you love.

That the film works as well as it does is thanks to the films subjects. Samuels and his friends are just great guys and natural storytellers. Their stories, illustrated by old 8mm and Super 8 film of the guys skating make it all come alive. This is magic of the highest order.

This is one of my favorite films of the year.