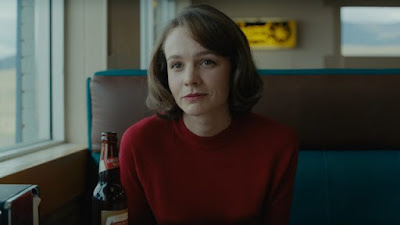 Paul Dano's adaption of the Richard Ford novel is a good little film. It is a solid literary adaption that will hold your interest even if it will eventually fade from your memory.

In 1960 a family moves to Montana in search of a new start. When dad Jake Gyllenhaal loses his job his wife and son step up to keep money coming in. Things become complicated when Dad takes a job fighting the wild fire that are devouring the forests nearby. His wife, Cary Mulligan, soon realizes that she may not want to be there any more. As their teen age son tries to navigate a new school he is forced to watch as his mother drifts away from the person he always knew.

Small lovingly made film is the sort of drama that is the sort of film that will big hit with critics and festivals. Its deep, meaningful and while entertaining it is the sort of film that is going to be forgotten by next year because most people don't really want to see this sort of a film.  I don't say that out of cruelty or dislike, its simply that most American audiences don't want smart literary adaptions no matter how good. (I wish this film wan't playing at the New York Film festival because it wouldn't have the baggage and expectations connected to playing at the festival)

Driven by four sterling performances WILDLIFE is a solid little film. It is the cinematic equivalent to reading a really good novel. When the film is done you know you've seen something. Its very meaty and satisfying. I went into the film not really wanting to see it and came out  delighted I had seen it.