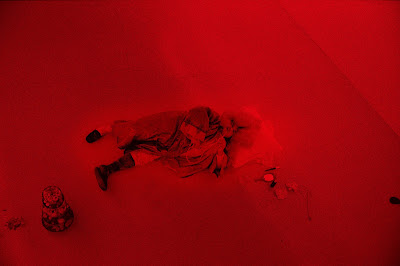 Albert Serra's hour long record of a performance piece done in Lisbon he directed. It is simply actor Lluís Serrat dressed as  Louis XIV wandering an around or lying on the floor of a room with red lighting moaning.  He moans hoy or oy or roi or some variation for an hour or so. For most of the film we are alone with the king and then right before he dies the audience wanders in.

I suspect most people are going to find it tedious or silly. I found it silly. I suspect that is part of the point- but at the same time I want to shake Serra and ask him if he is really serious about this. He probably is.  Which is fine, I mean you want to make pretentious twaddle go for it but asking people to pay for this?

I can't recommend any one paying for this sort of thing, but if you are curious here are a list of the big things that happen and the time they occur. 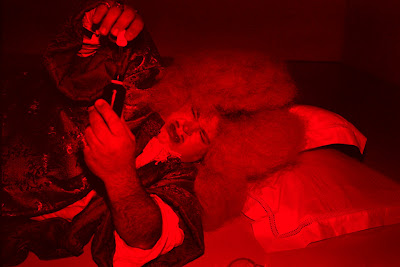 It begins with Louis standing in a room in the distance. He just moans
5 minutes in a close up of his back
about 8 minutes in he looks in a mirror preening while on the floor
11 minutes in shot in the mirror
12 candy dish groaning stops until he eats too much and lies down
Eats more then lies down
20 minutes slurps through a tube that goes nowhere
25 minutes dropper of medicine
28 minutes clearsthroat
33 minute in we see he has one black foot/leg- or is it a sock?
38 minutes we see a crack in the floor
44 minutes someone wanders in
45 minutes all sorts of people wander in (its a performance piece after all)
47 minutes music is finally heard
48 minutes he dies and people watch him laying there
59 minutes in two people come down and check on him and find he's dead
60 minutes in lights out applause (in the film) 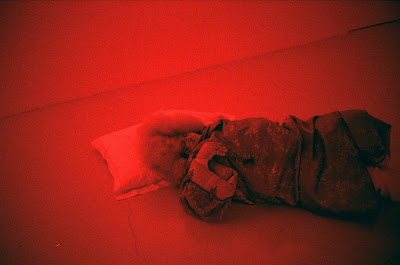 Email ThisBlogThis!Share to TwitterShare to FacebookShare to Pinterest
Labels: experimental, not worth the effort, NYFF 2018