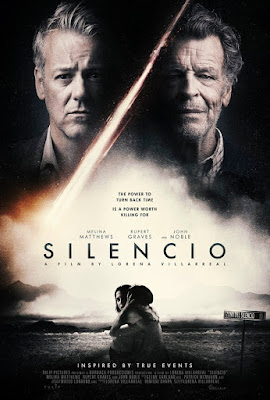 Despite all the promotional material Silencio has absolutely nothing to do with any true story, or even reality. I say this because the film opens with a bit saying it's based on a true story and some of the promo material does as well. It’s not. (okay maybe the crashed rocket part is real but nothing else.) It is what is a really solid thriller done in by the grafting on of out of place elements that leave you wondering what they were thinking.

The film begins with an American rocket crashing in the realm of silence in Mexico in 1970. A team is sent to pick up the wreckage. One of the team finds a stone that is covered by radioactive cobalt. As he and his boss are investigating it they are suddenly transported to the side of the road where the boss’s family is parked. When he realizes where he is, he tries to warn his family but before he can a car accident happens and everyone is killed except his granddaughter who had run to him. Years later the granddaughter is a therapist and is warned of upcoming danger by a medium in touch with the spirit. Soon after her son is kidnapped and the kidnapper wants her grandfather’s magical stone.

Covering ground we’ve traveled before Silencio is well acted and made but is saddled with a script that just too silly to work. The film doesn’t make a hell of a lot of sense  and the rules for making the stone work, it allows you to save someone in the past, are way too loopy. Things like“You must be holding the stone at exactly 3 in the morning and thinking of the person you want to save ….” had me wondering how it could tell time or what happens if you moved. I was shaking my head early and often as the excellent cast were left to flounder in a story that should never have had fantastical elements added to it. Sadly the fantastic stuff is just not that interesting, even if it is presented earnestly. If they had just had the stone as just valuable, and not done anything fantastical with it, it would have worked so much better. And yes I know the whole film is really about all of the themes kicked up by the fantastic elements about regret, righting wrongs and saving people we love but it is much to soapy (and silly) to be part of a straight thriller.

As it is Silencio is really not not a bad film, it’s too well made and well-acted for that, but it isn’t really a good one either.It's kind of a dopey one that reminded me of a kids film. Its fantastical elements just don't jibe even with the film's own reality, resulting in a film way too straight for it o ever really work.(There is only so much disbelief we can suspend)

I really can't recommend it. Perhaps if you run across this on cable or Netflix you might want to try it, but otherwise there are better films out there worth your time.
Posted by Steve Kopian at October 25, 2018