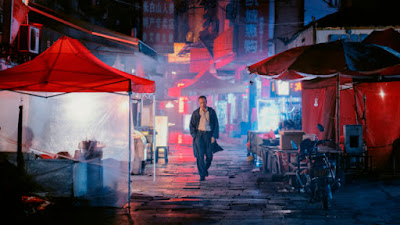 Bi Gan's LONG DAY"S JOURNEY INTO NIGHT is an ethereal mess. The film about a man searching for a woman who meant something to him in his youth and who is seemingly drifting in and out of memory and time before falling asleep in a movie. Once he falls asleep the film becomes a 3D single take dream that rehashes everything we've seen in the previous hour to no real purpose.

Personally I found the whole film a mess. The plot is a jumble and makes almost no sense. Yes it all looks and sounds good but that is all. As for the 3D sequence it's really not that good and looks like a cheap TV production especially when compared to the lush images in the first half. It is all sound and fury signifying nothing... except a wasted evening.

More cinematic tone poem than neon noir, LONG DAYS JOURNEY is a long dull haul best enjoyed by those who prefer form over content and pretension over meaning.
Posted by Steve Kopian at October 02, 2018