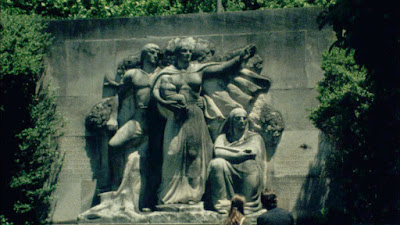 Formal to the point of silliness CLASSICAL PERIOD is an examination of intellectuals and intellectual idea.  With obviously scripted dialog, it is all deeply formal in exactly the sort of way that no one speaks, at least in this time period reveals the emptiness of many people lost in their thoughts. This is a film of a world where ideas matter most and not people who are ultimately rendered as noting more than the means of expressing some idea.

While I love good conversation I was turned off to this film and it's construction.

(CLASSICAL PERIOD will run later fall at the Anthology Film Archives for a week long run)
Posted by Steve Kopian at October 06, 2018