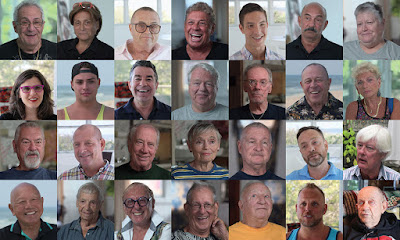 Any film that makes me feel nostalgia for a place I've never been is a great film. Michael Fisher's portrait of the Fire Island community that was home for gays for decades made me long to return home and be among the wonderful people who live there...only I've never been there before.

Telling the story via the people who have lived and visited there for decades and those who are new arrivals, Fisher's film paints a portrait of a community where people were allowed to be who they were. While there was always the danger of arrest, the community still managed to thrive and flourish. The film also tells the story of gay rights, from the days when everyone was pretty much closeted to the days of Stonewall and AIDS, however it is version that is well aware that what was and is happening in Cherry Grove isn't what it's like in the world at large (some people didn't think they should fight for gay rights)

I absolutely loved this story. I sat down to watch the film during a lunch break and figured I would stop it when I was done and then pick it up later on. Instead I found myself sitting motionless, smiling and scribbling notes on paper towels and napkins about all the things I wanted to tell you about. What an absolute great film.

In the end I've decided not to tell you any of the stories contained in the film simply because I want you to hear them the way they should be told, by the people who lived them. (I will say that the monkey story is hysterical.) This is a glorious tale that must be told and seen by anyone who has ever wanted to know if there was a place for them. Yes there is, I say this because if a place like Cherry Grove could exist then other places can exist where you too can call home.

An absolute must see for everyone for anyone who wants a great film with great people. This has turned into one of my favorite films of the year and one I can't stop recommending