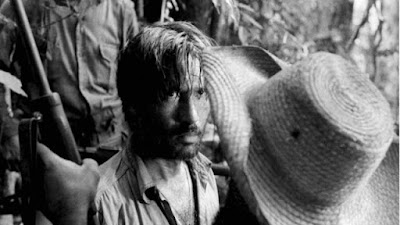 Envisioned as an international collaboration between the USSR and Fidel Castro's nascent Communist Cuban state, Mikhail Kalatozov's I AM CUBA was a spare-no-expense tetraptych of Batista-era Cuba which to this day has the power to stun and amaze audiences inured by decades of computer-generated effects and digital camerawork.

Co-written by Russian poet Yevgeny Yevtushenko and Cuban novelist Enrique Pineda Barnet, the film alternates Party-line didacticism and Latin sensualism in a kaleidoscopic whirl of propagandist aggrandizement and achingly gorgeous humanism that somehow never feels out of step. Each of the four segments charts the gradual radicalization of the Cuban proletariat, beginning with the heartbreaking story of a helpless bar prostitute cruelly humiliated by an American tourist and ending with the radicalization of a peasant farmer who joins Castro's guerrillas after Batista's soldiers kill his son. Kalatozov brings a different hallucinatory fervor to each section, most famously in an early unbroken tracking shot of bourgeois revelers at an American casino where the camera moves up and down the sides of buildings, beneath the feet of musicians and above the heads of businessmen, and finally down into and back up out of a pool full of swimmers. (Achieved using a pulley system, a rudimentary proto-Steadicam set-up, and military-grade periscope cleaner on the camera lens, this sequence directly inspired a similar poolside segment in Paul Thomas Anderson's BOOGIE NIGHTS.)

The middle two sections demonstrate a hypnotic use of sound that predicts Glauber Rocha's Cinema Novo treatises to illustrate the interior minds of their protagonists, from the clanging machete chops in a sugarcane field underscoring the growing frenzy of an elderly farmer who loses his land to a foreign fruit conglomerate in the second to a mournful guitar ballad reflecting the psychological guilt of a cowardly college student tasked with assassinating a corrupt police chief in the third.

Like the very best of Communist propaganda, it never loses sight of the central human element, seeing the Cuban people as wounded yet resilient in the face of unspeakable imperialist (specifically American) exploitation. What cosmic irony, then, that the film was coldly dismissed by Cuban audiences as an infantilizing stereotyping of their country and by Soviet critics as politically naive, dooming it to unseen obscurity for decades only to be rescued in the 1990s by American audiences. The recent 4K restoration by Milestone Film & Video is a revelation, nothing less than a singular, definitive cinematic experience.