The always great Ithaca Fantastik starts Friday with a killer line up of films. If you are around Ithaca New York you really have to make an effort to go see something.

How good is the festival? Despite being buried with a huge slate of films for several other upcoming festivals I'm going to make a run at getting coverage up here at Unseen.

Because the fest is screening some great films from other festivals below are links to the films we've reviewed before.

I had a review of PROSPECT scheduled to run after the festival screening to tie into the theatrical release but I've moved it up because the film is worth your time. Until it runs all you need to know is its a solid little western set on a distant moon where "gold" hunters get in over their head.

I really would like to run my review of LUZ because its one of the best "horror" films of the last few years (and probably one of 2018's best films as well) but I've been asked to hold off posting it by the distributors until the release sometime next year.  That shouldn't stop you- all you need to know is that its a great film about a demon, a girl and the police...and that despite being tense as all hell it really isn't a horror film.

If you can go see something. And if you can't keep checking back here for reviews of the films they are screening.

For tickets and more information on the festival go here. 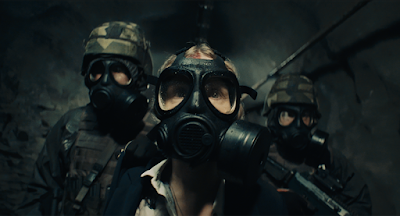