My lost innocence and THE AMERICAN FRIEND (1977) 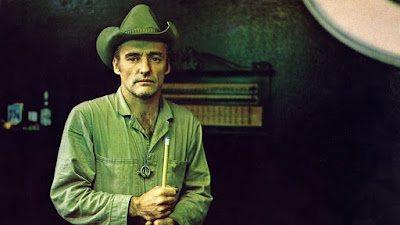 What can I say I lost my innocence in the dark with Tom Ripley.

I have always been a crazy ass film fan. From an early age I just wanted to watch movies. I would get up a 3 am in the pre VCR/VOD days to watch silent or foreign films on the Late Late Late Show. I had an early love of Werner Herzog and wandered into see his NOSFERATU when knee high to a grasshopper and was repeatedly asked if I knew that I was seeing a subtitled foreign film. (Yes, yes I did. Thank you).

I would go to any movie I thought looked cool or forbidden – which often meant foreign films. Which was how I wandered into seeing Wim Wenders American Friend and was scarred for life. This version of Patricia Highsmith’s Ripley's Game was my first encounter with Tom Ripley and it has made me uneasy about anything with the character ever since.

The plot has Ripley (Dennis Hopper) running scams on a dying Bruno Ganz that will leave everyone except Ripley broken.

Ripley’s guiltless socio-pathological behavior was really the first time this kid, about 13 at the time, took a walk on the dark side. I tended to watch films where good triumphed over evil and everything was skittles and beer. This film set me straight and showed me that sometimes bad guys won and we could kind of like them even as they wrecked lives.

What was this? I didn’t know. But I wanted more and it became a gate way to explore European dramas that weren’t Bergman or Fellini. While I thought I was doomed by my love of films before, Wim Wenders assured that I was going to cinematic hell in the Express Lane. The gates were open and I gorged on everything I could get my hands on- delighted by all of my new found treats.

You are probably wondering why I’m talking about this, because American Friend is making a return to the New York Film Festival and if you’ve never seen it you should. While I don’t think it will have quite the earth shaking effect on you as it did on this crazed 13 year old, I think you will walk out of the theater feeling battered and bruised and having seen something that has made you think.
Posted by Steve Kopian at October 07, 2018