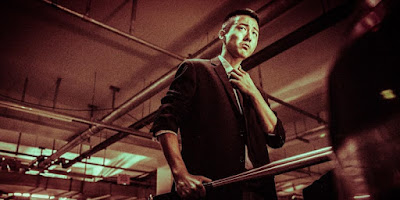 While we really don’t need another zombie/virus film Lost in Apocalypse is a good enough film to make us think that perhaps maybe we do.

Starting with a number of seemingly unconnected of people staggering out of a car at a where they try to get access. The people inside don’t want to let them in – until one of them talks into the security camera and lets them know who they are. The film then flashes back to how they ended up in the situation and how they had to fight the rapidly growing number of “zombies”.

Balancing horror and humor Lost in Apocalypse raises above the majority of zombie horror films by giving us compelling characters and situations that are not your typical survival ones. There is more here than just zombies with the characters playing out storylines that have to do with their world. What the warehouse they end up in and how they got their have nothing to do with the typical random chance we see in zombie films.

While not overly gory the attacks are well handled and the non- monster action sequences are exciting.

As I implied above the zombie genre has been played out to the point of boredom. On the other hand when a sweet little gem like Lost in Apocalypse comes along I am more than willing to get a tub or popcorn and curl up for some chills.

Recommended when it plays at the Bushwick Film Festival this weekend and Screamfest in LA today.

For tickets and more information on the Bushwick screening go here
Posted by Steve Kopian at October 11, 2018