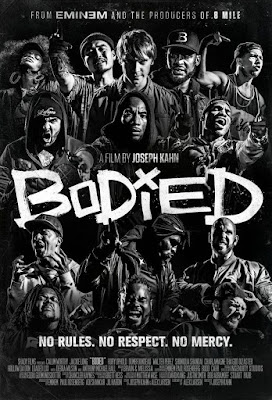 This is a repost of mt review from Fantasia earlier this year.

Privileged white kid Alan is working on his masters when gets drawn into rap battles.

Produced by Eminem and written and directed by Joseph Kahn BODIED is going to split audiences. Some people are going to fall all over the satire, the flashy filmmaking and word play and eat it up, while others are going to hate it with a passion if they don't just leave the theater (or since this is going to You Tube Red click- on a cat video).

I really didn't care for it and to be honest and after about 40 minutes was done and tuned out. Yea I thought the wordplay of the rap battles was wonderful, but outside of that the film seemed to be kind of obvious in what it's doing. I kept noticing the points it was trying to make instead of being carried along by the story. I never really cared.

It doesn't help that Kahn doesn't want us to really like Alan. While this allows him to approach some of his themes differently than if we cared for our hero, it also makes it really hard to connect with him and his plight. We don't connect and like the characters in the film we want to toss him out on his ass (or leave the theater), which is not what you want when you've made a film that's a long two hours.

To be honest I don't hate the film. It isn't bad, it's simply so artificially constructed that I never got connected. Yes, the discussions of racism, cultural appropriation, political correctness and pretty much every other theme and idea in the film are ones we should be having, but the fact that this film is intentionally in your face and is going to split it's audience is going to kind of defeat the purpose.

Yes, I understand the film, like Kahn's in earlier, and much better, film DETENTION, isn't a film for everyone, nor one where Kahn compromised. I love that the director has made a film with his own unique style and voice. But at the same time the fact that he is taking no prisoners means the the most of the people who should see the film never will.

As much as I really don't care for the film, I admire and applaud what it's doing, I just wish it was something I could applaud with the heart instead of just the head.
Posted by Steve Kopian at October 29, 2018