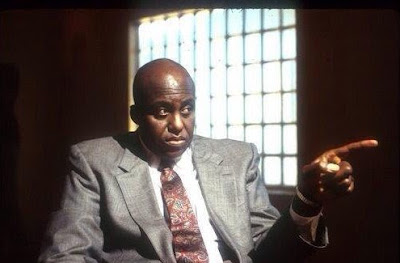 Beginning Saturday November 17, Metrograph will present a retrospective of actor and director Bill Duke, where he will appear in-person. As a director, Duke has contributed a handful of tough, smart contenders to the modern canon, including the back-to-back brilliant A Rage in Harlem (1991) and Deep Cover (1992). As a mentor and humanitarian, he has cultivated young, black talent on the grassroots level through his Duke Media Foundation. As an actor, looming of stature and somber of visage, Duke needs only to walk into frame to take over a movie, notable recently for his standout scene in Mandy (2018). From playing a regally elegant gay pimp in Paul Schrader’s American Gigolo to anchoring some of the biggest and bloodiest action spectacles of the 1980s, Duke has had an extraordinary career in front of the camera, and a no less unforgettable one behind it—a towering screen presence, of towering accomplishments.

With special thanks to Brandon Bernath and Aaron Stewart-Ahn.


Commando (Mark L. Lester/1985/1990/DCP)
Schwarzenegger’s Delta Force colonel John Matrix (!) has retired from active duty, but when a gang of mercenaries looking for trouble kidnap his daughter (Alyssa Milano), they get more than their share at the business end of a rocket launcher. Duke cements his action star immortality as an ex-Green Beret in the employ of Dan Hedaya’s South American revolutionist, the grudge match between Duke and Arnie vaulting over the high bar of mayhem set by this extended firefight of a film. Come for the scorched earth vengeance, stay for the pithy one-liners!

Predator (John McTiernan/1987/107 mins/DCP)
When people use the term “80s action movie,” what they’re basically thinking of is this chef d'oeuvre of the type from Die Hard director McTiernan, a buffet of meme-famous biceps and heavy ordinance in which an American rescue team plunges into the Central American jungle, freely slaughtering enemies with superior firepower before finding themselves in the crosshairs of another alien invader. Schwarzenegger leads the team, backed up by an ensemble including Jesse Ventura and a scarily intense Duke, defoliating the forest with his minigun blazing.

Menace II Society (Albert and Allen Hughes/1993/97 mins/35mm)
A virtuoso debut that brought expressionistic style to the urban drama, the Hughes’s mordantly funny, shockingly savage Watts tragedy is an anecdotal telling of the life of street-smart Caine (Tyrin Turner) and his best friend, O-Dog—a breakout part for Larenz Tate, memorably introduced as “America’s nightmare: Young, black, and didn’t give a fuck.” Duke’s role as a police detective who grills the boys in relation to a shooting is small but splendid, and all but unforgettable. If you haven’t seen it, you know you done fucked up, right?

Mandy (Panos Cosmatos/2018/121 mins/DCP)
After Nicolas Cage’s pacific, reclusive life with his girlfriend Mandy is interrupted by the arrival of members of an apocalyptic cannibalistic cult, the Children of the New Dawn, he’ll have to pay a visit to his old pal, Caruthers (Duke), to pick up his trusty crossbow, sights set on revenge. Duke provides a moment of authority and gravity, just before this strikingly styled early ‘80s-set instant cult classic plunges into madness courtesy of Cage at his most frantic, feral, and fatally fierce.


The Killing Floor (1984/118 mins/35mm)
Duke honed his directorial skills by working extensively in episodic television, but his very best moments in this period came courtesy of the American Playhouse series, for which he made this wrenching drama of the first Great Migration generation starring Damon Leake and Moses Gunn as two friends set at odds in World War I-era Chicago when one chooses to join an interracial union. The sheer excellence of Duke’s accomplishment, distilling a sprawling history of class and race in America into distinctly human-scale vessels, garnered The Killing Floor an invitation to Cannes.

Deep Cover (1992/107 mins/35mm)
Laurence Fishburne gives a matchless performance as a cop still burdened by the childhood memory of his father’s crippling addiction, his straight-arrow life is derailed when he’s recruited into undercover work investigating the Los Angeles cocaine trade. Duke has all the action-thriller twists and turns down cold, but adds an element to this violent neo-noir that few commercial directors would, situating his story in a fleshed-out social world that considers the generational legacy of poverty and the racial politics of the War on Drugs. Add to this some over-the-top gallows humor courtesy camp heavy Jeff Goldblum, and you’ve got the makings of a true tour de force.