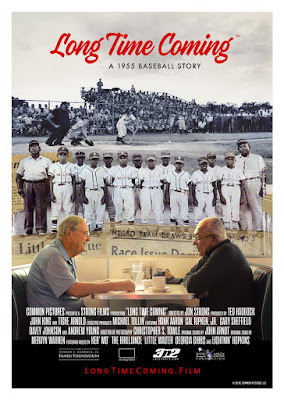 Long Time Coming tells the story of the first inter-racial little league baseball game in the American South. Held in 1955 the game was played between a black team and a white team. The film charts the road to the game and how it affected the lives of the kids, now adults who played in it.

The film is what happened when the all black Pensecola Jaycees won a regional championship and traveled take on the all white Orlando Kiwanis. If they Kiwanis refused to play the Jaycees they would forfeit, something that had happened before. While there was some opposition to the game on a administrative level the kids really didn’t care and simply wanted to play the game.

Largely told by some of the kids, now adults, who were there, the film is a solid little telling of a small, largely forgotten moment in time that helped the wheel begin to turn away from segregation to a more integrated society. To be certain it didn’t instantly change everything but it added some momentum.

Long Time Coming is a good little film. While I could quibble about a few little things in how the story is told, the tale at its center is what is important and there is nothing wrong with that. It is a hopeful tale from a dark time when the old hatreds were put aside in the name of fun…and perhaps something more important. It is definitely worth a look.

Long Time Coming is getting a special screening Tuesday night at the SVA Theaters in New York (with special guests) before a regular release.
Posted by Steve Kopian at October 20, 2018