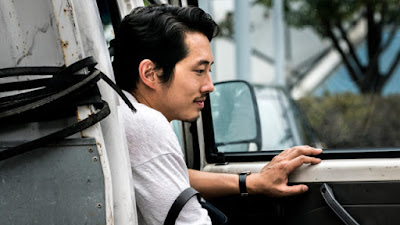 The characters in Haruki Murakami stories are some of the most reactive in the modern literary canon—they spend much of their time puttering around until inadvertently encountering something (or someone) strange or otherworldly which challenges the nature of reality. His books and stories can require incredible patience, not just for their intimidating length, but for their leisurely pace.

In that light, it’s almost a cosmic punchline that Lee Chang-dong’s Burning, an adaptation of Murakami’s short story “Barn Burning,” would stretch six pages of source material into almost two-and-a-half hours of runtime. Burning might be the best cinematic adaptation of Murakami yet, if not in terms of actual quality, then in fidelity to his work’s texture, mood, and pacing: in addition to nailing the superficial reoccurring details of his work (e.g. explicit, nonchalant sexuality; kitty cats!), it captures his trademark existential anxieties (e.g. the impossibility for alienated young people to truly fit into the collectivist societies of Southeast Asia; kitty cats!).

A slow-burn thriller if ever there was one, the film follows disaffected twentysomething farmer Jong-su (Yoo Ah-in) as he falls in love with old childhood friend Hae-mi (Jeon Jong-seo) after accidentally running into her. His feelings are tested after Hae-mi, an impulsive free spirit in the mould of so many of Murakami’s female love interests, traipses off to Africa for a vacation and meets Ben (Steven Yeun), a rich playboy with an unusual hobby involving fire. After Hae-mi mysteriously disappears, Jong-su begins a fateful—and potentially fatal—private investigation to find her.

There’s maybe only an hour of plot in Burning; the rest is either filler or sequences stretched to interminable length for the sake of interminable length. Much like Maren Ade’s Toni Erdmann, the 2016 NYFF cause célèbre, it could easily lose an hour of irrelevant subplots and sequences of characters literally wandering throughout the countryside. The film’s point is to create intense ambiguity—but certainly this can be done in a tight hundred minutes.

Are Lee’s methods here faithful to Murakami? Yes. Do they translate to a good movie? Maybe. Austere, brilliantly acted, and punctuated with flashes of genius (a sequence where a stoned Jeon dances topless in front of a sunset is one of the most beautiful and hypnotic of 2018) one’s appreciation for Burning will depend on one’s patience for tedium.