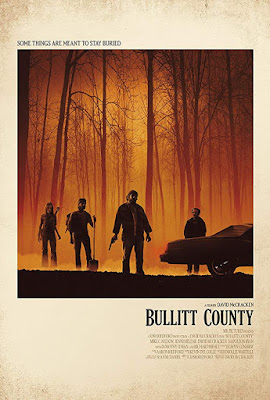 BULLITT COUNTY is one of those great little films where going in it is best knowing as little as possible. I mean you really don't want to know where this goes because it will result in one hell of a ride. Never mind that writer director and star David McCracken has fashioned a twisted tale that  isn't what you expect so even if you know a little bit you're not going to know where it ends up.

It's 1978. One of a quartet of friends is getting married so by way of a bachelor party they are going to recreate a legendary bourbon distillery crawl across Kentucky. The plan is to hit the old haunts and look for a lost bootlegger's fortune that has lured dozens of people to their oblivion. It's doomed from the get go as their first stop is no longer a distillery but a winery. To say that it goes even more wrong is an understatement.

I'm leaving it there. You don't want to know more going in. You really don't.

While the film can be slightly anachronistic with some of the language and behavior being out of place for the 1970's, it is nothing you wouldn't notice if you didn't live through the time period. I would wonder why the film wasn't set in modern day since it often feels that way, except that things like cellphones and some modern conveniences would have cocked up the plotting.

The plotting is ultimately stellar. McCracken has fashioned a wonderful tale that constantly is going anywhere but where you expect. And the plot "twists" are not the sort of things that are completely out of the blue, but more we are conditioned to think of stories progressing a certain way and are surprised when a new and unexpected way appears. It all makes sense with the result is real tension.

As I said at the top, this is a great little film by any standard. Highly recommended when it opens Friday