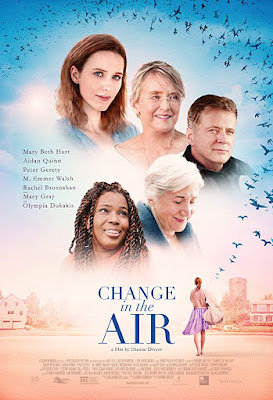 A young woman who seems to get more mail than she could ever hope to read moves into a quiet neighborhood and shakes things up.

I was not going to review this film but some two weeks after see it I find I’m still pondering what the hell that film is all about. I mean that in a WTF sort of way. This is an intentionally confusing film that is supposed to make us wonder who exactly the young woman is. Is she an angel or just a person? We don’t …. And I don’t think either director writer Audra Gorman or director Dianne Dreyer knows either and as a result we are are left confused.

Actually the whole affair is confused as the great cast (Macy Gray, Adian Quinn, Olympia Dukakis, Mary Kay Place, M Emmett Walsh) circles each other and got through their paces. Going back and looking at my notes I wasn’t really clear as to who everyone was and what was going on beyond the mystical. There is a sense that the cast knows who is who and what is what but one of it is comes off the screen. Admittedly part of the confusion late in the game might be my own fault since I stopped paying strict attention, but at the same time some of this should have been clearer from the start.

In a weird way watching the cast go through their paces was comforting but at the same time its about as compelling as the stuff you put on as background noise while you clean the house- you know the sort of thing you put on just to erase the silence.

Cast aside, not worth the effort
Posted by Steve Kopian at October 18, 2018