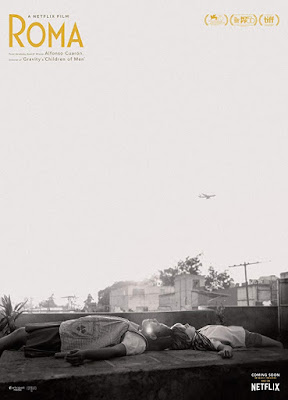 I have to begin by saying that if you can see Alfonso Cuarón's ROMA at the New York Film Festival or in a theater with perfect surround sound do so. This is a film with a truly aggressive surround track that had myself and others wondering who was the nimrod taking among us- until we realized it was the soundtrack putting voices all over the theater.

That said, I'm not really going to do a proper review for ROMA. This is not because I don't like the film, merely that the hype of its awards, its Oscar chances and its greatness that has come out of every film festival it has played has gotten in the way of my judging it fairly. As I told the reporter from a newspaper from Mexico that interviewed Hubert, Lauren and myself, I really liked the film, but I would have loved it had I seen it with no hype. It was a sentient the reporter agreed with since she said that when she first saw the film she knew nothing about it and it blew her away. To that end I'm going to have to see the film again to take it on its own terms.

As it stand now I really like the film a great deal. It is a wonderful time capsule of 1970-71, that having lived through the time, feels right, despite taking place in Mexico while I grew up in the US.

Based on Cuaron's maid, the film is a look at a year in the life Cleo, a maid working for a doctor and his family. Over the course of a year a great deal happens, not the least of which is the fact that both Cleo and the doctor's find themselves alone and a drift as the doctor runs off with a mistress and Cleo get pregnant by a man who tells her "isn't it great" before instantly walking out of her life forever. As their lives happen, larger events transpire around them often in such away that they intersect in unexpected ways.

It is a warm and loving film where the director is juggling a great many themes and emotional threads that its clear even from a first viewing that one really needs to see the film several times to unlock it's secrets. During the press conference Cuaron mentioned a number of them pointing out how important time is in the film specifically how scenes are allowed to play out in real time. He also talked about how the film is tied to earth, air fire and water, with the film beginning with us looking at the ground and it ends with us looking at the sky... and there is more but that is for you to discover.

Getting a theatrical release to help it with its excellent Oscar chances this December ROMA will also be playing on Netflix. While I think a good theatrical presentation of the film is recommended, however you see it, I suggest that you do so. 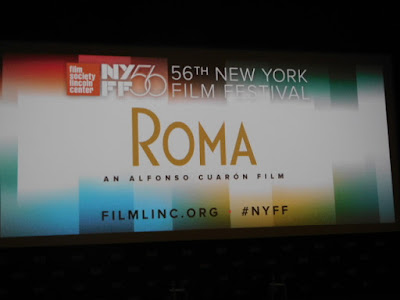