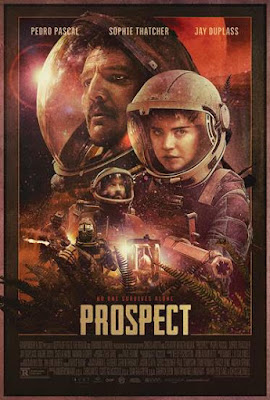 A father and daughter drop down off a space ship in orbit around a green moon in order to score some alien gems before the ship leaves forever. Things become complicated when they are confronted by another prospector and the hostile environment.


Expanding their short writers and directors Christopher Caldwell and Zeek Earl have made a good little film that is going to confuse those wanting a full on space opera . This is truly a western set in space. Take off the space suits and drop everyone in the America west and this would be a western where Jimmy Stewart would be at home. The science fiction trappings are just that trappings. This is a western that is a blood relative to the more serious films that Stewart, Henry Fonda and Gregory Peck were making in the late 50's and early 60's. It is actually a film that deserves the serious moniker of a space western more than the Hammer misfire MOON ZERO TWO.

Deliberately paced, PROSPECT takes its time spinning out it's tale setting up the characters and the world the film operates in. It is clear that the directors know the world and the technology that is in their film and unlike most other science fiction films there are no annoying questions where we have to go "but what about..." We are in a fully realized world. (and lived in there are signs of people and life where there needs to be- like smudges on a window)

PROSPECT as a whole film is a solid little tale. While there is no doubt the film can be a little slow and the film shows signs of fatigue from the expansion, it is still a really good western that keeps it all real and believable. What I liked about the film was 20 minutes in I wanted to see the film again simply because Caldwell and Earl's mixing up of genres as resulted in a film that played with my expectations. I thought I knew what the film was going to be and it ended up being something else.

Beginning it's theatrical run next Friday and expanding over the net couple of weeks PROSPECT is a film that is worth searching out, especially if you are tired of big brainless Hollywood science fiction films or miss old school westerns but don't mind a clever variation on the theme or as setting a a bit farther to the west than any other film.

PROSPECT plays at the Ithaca Fantastik tomorrow and hits theaters and Digital platforms next Friday
Posted by Steve Kopian at October 26, 2018