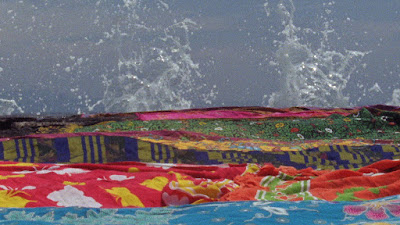 Impossible to full describe mix of animation, experiment, travelogue and head trip Jodie Mack's THE GRAND BIZARRE is one of the finds of the New York Film Festival.

The film is a heady mix of styles ashed together to create a one of a kind cineamtic head space as textiles dance around the screen as Mack travels around the globe. This is a film you watch on a BIG screen in the dark and fall into for an hour to go somewhere else and to think thoughts you've never had before.

I can't explain what this film is like only implore the adventurous of you to seek this film out and give it a look.

One of the must sees of this year's NYFF.
Posted by Steve Kopian at October 03, 2018