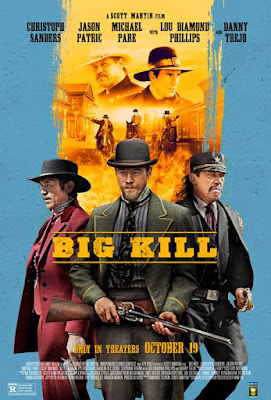 If you want to see a really good film that is going to be on almost no one's radar then make an effort to see BIG KILL a surprisingly great little western that has hit theaters.

The plot of the film has two roguish gunfighters hooking up with a tenderfoot who is heading to the town of Big Kill in Arizona. Never mind that no one has heard of it it's supposed to be a boom town with a silver mine. In reality its a dying town lorded over by a deranged preacher.

A beautifully crafted little gem of a film, BIG KILL shines thanks to a solid script and a first rate cast to bring it to life. While Danny Trejo and Michael Pare are barely in it for three minutes despite the above the title billing, the rest of the cast from Jason Patric as the preacher, Lou Diamond Phillips as his ally to Christoph Sanders, Scott Martin and Clint Hummel as the heroes are all first rate. What I like about the film is that it doesn't rely on action to survive.  Yes there are shoot outs and explosions of violence but first and foremost its about the characters which makes the action all that more exciting since we care about who survives.

How good is BIG KILL? I would gladly line up for a sequel.