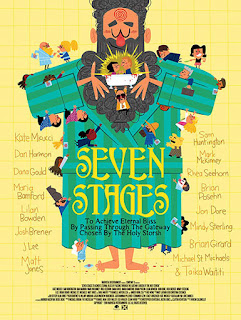 A couple gets a great deal on an apartment and happily moves in- unaware that it was the place chosen by the religious leader, the Holy Storsh, to end his life and thus pass through the gate to paradise. As a result a steady stream of his followers appear at their door and insist on killing themselves in their bathtub so they too can follow in his footsteps.

This is a five minute sketch stretched to twenty times the breaking point as variations of the same thing happen over and over again (people show up, they fight to use the bathroom, die and the cops come). It runs out of steam almost at once. Even the variation of the couple becoming obsessed by the Storsh's teaching goes nowhere.

Sitting in the packed critics screening (possibly the most crowded I attended at Tribeca) there was almost dead silence (this is a comedy) and lots of walk outs. Only director Taika Waititi, as Storsh scored any sort of love. Honestly he should have directed this god awful mess since he could have made it funny or at least moderately bearable.

I hated this film as did pretty much everyone around me and we all kind of decided that from that point on we would sit only on the aisle seats for the rest of the fest so that we could walk out on a big stinker like this and not get trapped in the center aisle unable to step over our disbelieving colleagues who want to remain against all logic and reason hoping a turkey will turn into a dove.

Avoid at all costs
Posted by Steve Kopian at October 28, 2018

Email ThisBlogThis!Share to TwitterShare to FacebookShare to Pinterest
Labels: Ithaca Fantastik 2018, not worth the effort, repost