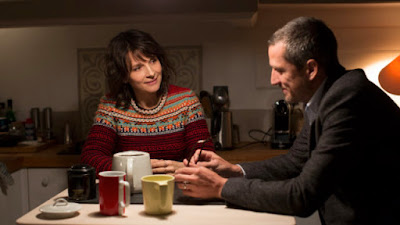 Any Olivier Assayas film playing the New York Film Festival is a must for me. His CARLOS was the first thing I ever covered as a member of the press  in 2010. As a result any film of his that plays the fest is one I will attend.

This year's offering is NON-FICTION starring Juliet Binoche. The film is the story of Binoche who plays an actress, her husband who is a book publisher, one of his authors and the author's wife. As the couples have affairs and go through life they discuss the state of the world, publishing both as hard copies and digital ebooks,  and the state of  humanity in the digital world.

NON-FICTION is an odd film. Nominally a romantic comedy of sorts, most of the talk is actually about ideas. This is the rare film where people are actually talking about ideas in an intelligent way. While some writers have argued that the discussions are dated by a year or so, I really didn't mind because the film acts as a kind of snap shot of where we were when the film was made. Additionally I simply loved that we have adults talking rationally about serious subjects. I didn't need it to be exactly of the moment since the talk of making everything digital and things like how binge watching is effecting our viewing habits are still relevant. What is weird is that the romance kind of takes a back seat to the ideas.

As for the romance, it's well handled. More a question of who is having an affair with whom, the film reveals itself to be a very light bedroom farce of sorts. While not quite perfect, everyone is a bit too forgiving about the affairs, it still remains entertaining. Besides any film that has a big unkempt guy being able to capture the heart of someone as beautiful and intelligent as Binoche keeps the hope alive that I too can find someone special.

While I know some people will want more romance and less talk, for me the mix was perfect and I enjoyed the hell out of this film to the point that I am planning on adding the film to my collection down the road.

This is a wonderful mix for the head and the heart and is heartily recommended.
Posted by Steve Kopian at October 02, 2018